Artie Shaw and his Orchestra : Frenesi

The word frenesí is Spanish for “frenzy”. In 1940 Artie Shaw went to Mexico for a much-needed vacation and came back with the tune “Frenesi”, which was composed by Alberto Dominguez Borras of Mexico City.  During World War II Major Thomas Haynes named his P-51 Mustang fighter Frenesi after the song, stating that it was a tribute to his wife Louise.  Frenesi is now considered a jazz standard and was inducted into the Grammy Hall of Fame in 1982. Artie Shaw’s recording of Frenesi can be heard in the soundtrack of the 1980 Martin Scorsese film ‘Raging Bull’, for which Robert De Niro won the Oscar for Best Actor. Artie Shaw’s ‘Frenesi’ can also be heard in Woody Allen’s 1987 motion picture ‘Radio Days’

Album:  Single
Side A: Adiós Mariquita Linda
Side B: Frenesi

Charted: Frenesi reached number one on the Billboard pop chart on December 21, 1940 and held the number 1 position for 13 weeks straight.

Lyrics for Frenesi by Artie Shaw

Often played as an Instrumental

Some time ago
I wandered down into old Mexico
While I was there
I felt romance everywhere
Moon was shining bright
And I could hear laughing voices in the night
Everyone was gay This was the start of their holiday
It was fiesta down in Mexico
And so I stopped a while to see the show
I knew that frenesí meant “Please love me”
And I could say frenesí
A lovely señorita caught my eye
I stood enchanted as she wandered by
And never knowing that it come from me I gently sighed frenesí
She stopped and raised her eyes to mine
Her lips just pleaded to be kissed
Her eyes were soft as candle-shine
So how was I to resist?
And now without a heart to call my own
A greater happiness I’ve never known
Because her kisses are for me alone
Who wouldn’t say frenesí? 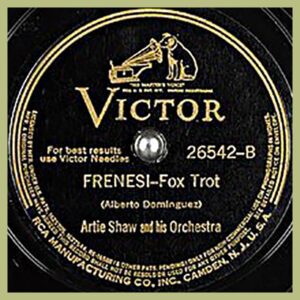