‘Star Dust’ was conceived by Hoagy Carmichael in 1927 as a jazz instrumental, influenced by Bix Beiderbecke.  Mitchell Parish wrote the lyrics in 1929 the song became a hit the following year in a recording by Isham Jones, who led one of the most popular orchestras of the pre-swing era.  In 1938, Orson Welles’s radio broadcast ‘The War of the Worlds’ featured an excerpt of ‘Star Dust’ played by the fictional Ramón Raquello Orchestra.  In the 1940 movie titled ‘Star Dust’, actress Linda Darnell sings ‘Star Dust’ on a theater stage with the song’s lyrics being projected on a screen alongside her.  Later, in May 1953 Shaw’s version of  “Star Dust” ranked on the Ten Pop Standard Records list three times, topping the list and selling over 1 million records.  ‘Star Dust’ can also be heard in ‘The Man Who Fell to Earth’, a 1976 science fiction movie starring David Bowie.

Always reminding me that we′re apart 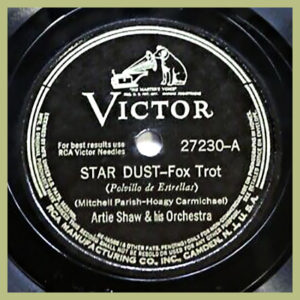 Artie Shaw and his Orchestra