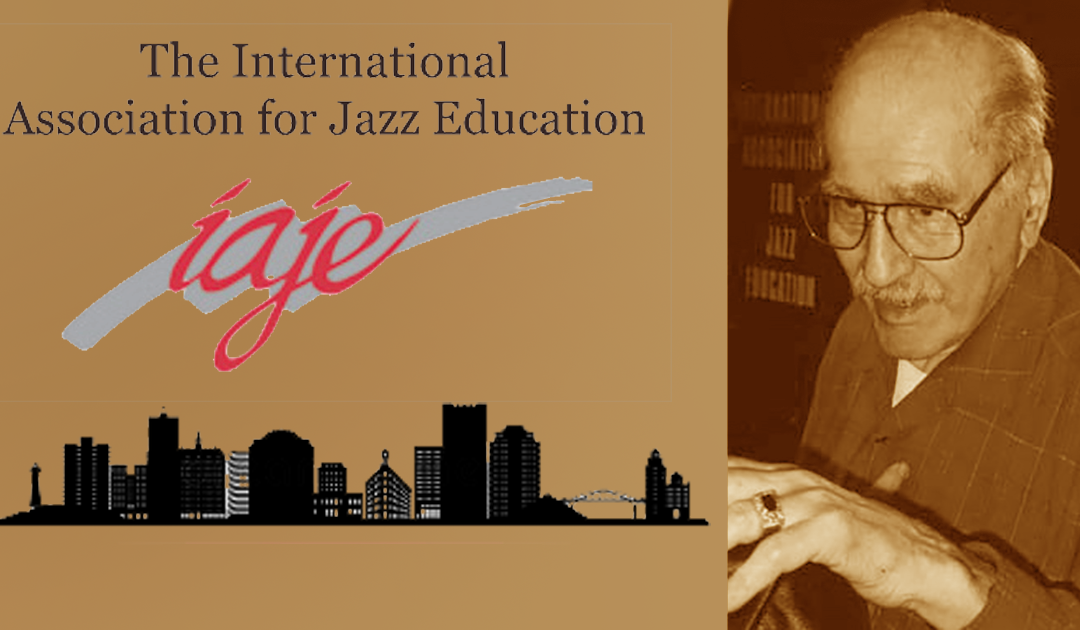 Past Chairman of the Clarinet and Saxophone Society of Great Britain

The 29th Annual International Association for Jazz Education (IAJE) Conference took place on Jan 9th -12th 2002, at Long Beach, California. Daily temperatures were in the high seventies, and nothing but blue skies did we see. We also saw the liner Queen Mary, and could visit the Russian Foxtrot Class Submarine Scorpion, the excellent Aquarium of the Pacific, the beach, and a fascinating local Farmers’ Market. Enough there to grab a visitor’s interest. But for jazz lovers there were many reasons to remain indoors.

With as many as nine events running simultaneously from eight in the morning until midnight it would take a score of reporters to cover the entire IAJE conference, even if they could resist stopping to hang out with friends. Auld acquaintance is always a great aspect of the annual madness of the IAJE Conference.

Choices had to be made. I opted to attend an interview featuring Artie Shaw, which was moderated by Peter Levinson and called Personal Best. It was named for the newly released selection of vintage Shaw tracks on CD, selected by Shaw from his original RCA recordings. Artie Shaw was born in May 1910. Now approaching his 92nd birthday, he is a little unsteady on his feet, slightly hard of hearing, but still full of vim and vinegar. Levinson had little to do but intervene to keep the peace. Artie’s impressive memory, outstanding vocabulary, wry observations and ofttimes acerbic opinions had the capacity audience spellbound. They laughed and applauded, and loved every minute.

Artie began by trying to explain why he was at the conference, but rapidly got into an anecdote about life on the road, set in a small coastal town on the Gulf of Mexico.

“So here I was in Palacios. We’re playing this ballroom. Guys are dancing, and they’re doing the damnedest things. Pieter Bruegel painted peasants doing similar dances. Their feet are always very awkward. So I thought, what are they doing? What am I doing? The band is playing fairly sophisticated music, and that audience is out there doing dancing that has nothing to with what we’re doing. That wasn’t too strange; it happened a lot. But normally I was pretty well aware of it. This was egregious, it was out of the way, too much.

I noticed one man in particular. I knew that he had to be a very rich rancher, because he had shabby denims on, a shabby denim shirt, but a belt buckle that looked like a ruby and diamonds, and lizard skin boots. He was pretty expensive where it counted.

He was dancing with a tall statuesque woman, just tall enough so that his nose could be buried in her cleavage. It was a sight to behold. I kept watching this guy. Every once in a while he became aware that I was watching him. You’re trying not to watch a guy, but there’s the guy. He’s always right in your eye. At a certain point he’d look at me, tap the side of his nose, then the side of his head. What the hell’s he trying to tell me? Obviously he was trying to tell me something.

I listened to everybody I could. Some guys I listened to for a minute and a half, and I said, “That’s enough.” Others, I listened for five seconds. I didn’t want to hear any more. Some of the Klezmer guys. That’s a corn ball thing to do. I did it once at the end of a piece called Dr Livingstone, I Presume? Oddly enough, one critic wrote a whole scenario.

The Gramercy Five was a small group taken out of my band. We played this piece. It had an African sound. At a certain point I decided that I would play a sort of Jewish piece, a horah it’s called. It’s a Yiddish piece of music. And I went (sings), and the drummer went with me. Now this critic writes about this. He said, “Shaw wrote a piece of music in which he depicts himself as Stanley meeting Dr Livingstone. When they meet, they go into a happy dance.”

That was no more my intention than it was to fly in the air. It was just madness, but that’s what happens. You do what you have to do. The percipient, the perceiver, hears and thinks what he wants out of it. You can’t control that.

On the training of an audience, the first thing to do is to make the audience understand that this is music. If it’s not music, I don’t know what the hell we’re talking about. Jazz is music, first, foremost and last. There’s no such thing as jazz; it’s music, it’s American music and it’s informal. So why do we have to call it jazz? Kenny G is called jazz. (Laughter).
Well, you’re laughing, but if Kenny G were doing this lecture you couldn’t get in this room. He has an enormous audience. I don’t know what it is. It’s basically elevator music. He plays the same thing over and over again. You might as well be a captive audience. I’m not knocking the guy. I don’t think he knows what he’s doing. But that has nothing to do with me. The audience buys it, in huge quantities. So we’re back to what H.L. Mencken said: “Nobody ever went broke underestimating the taste of the American public.”

You cannot encourage stupidity. When you run into stupidity, it is your duty to say, “That is stupid.” When an audience gets up and applauds a bad bass solo, that is stupid. If they know it’s stupid, maybe they’ll sit down next time.

I’m here to tell you something that I don’t think you’re going to like too much. But I’m not here to please you. I’m here to talk to you about what I think. If you agree, you agree. If you don’t, tant pis (‘tough’), as the French say. I don’t think that anybody can be taught to play jazz.

You can’t teach that. It’s not something you can do. You can’t teach somebody to ride a bicycle. He’s got to get on the bicycle and ride it until he finds out what he has to do. With playing any instrument, if you want to play this idiom that we’re calling jazz for shorthand, you cannot teach him. What you can do is encourage him when he’s doing the right thing, discourage him when he’s doing the wrong thing, steer him toward the people he should listen to.

I get asked about talent a lot. ‘My son has talent; should I encourage him?’

Up to a point it’s all right. If he wants an instrument, let him have one. One guy said, “My son wants to play clarinet. Where can I buy him a cheap clarinet?”

I said, “Don’t buy him a cheap one. Buy him the best one you can find. Then, if he doesn’t like it you can sell it. If you’ve got a cheap one, nobody will ever want it, and he won’t know whether it’s the clarinet or him.”

You don’t want the instrument in your way. You want an instrument that’ll do anything you want to do, and more.

How many new clarinet players are there around? I hear them, and I tell you, I can’t tell the difference. They sound alike. I’m not putting them down. They’re very good.

About the word ‘talent’. My son Steve came to see me one day. He’s a very weird kid. We’re from totally different worlds. He grew up in the house of Jerome Kern. He’s Jerome Kern’s grandson. [Shaw was married to Elizabeth Kern for two years during the early 1940s, the third of his eight wives. When asked why he married all those beautiful women, Shaw is reported to have asked, “Should I have married ugly ones?”]. Steve shows up now and then. He had a guitar with him. He said, “I want you to hear me play.”
I said, “Guitar?”
He said, “Yeah.”
I said, “Well, a guitar’s a piece of furniture. You hang it on the wall. A French Horn, or a bassoon, I would listen with much more interest. But if you want to play it, all right.”

So he sat down, and he played guitar. And to my astonishment, to my chagrin, he sang. I don’t care a hell of a lot about singing. There are only four or five singers I’ve ever listened to with any real respect. So he’s singing these little songs, and playing guitar. He stopped after two or three and said, “What do you think?”
I said, “Well, we’ve got Willie Nelson.”
He said, “What do you mean?”
“We don’t need another one. Where are you?”
He said, “I don’t know. I thought I was doing pretty well.”
I said, “Well if you did this for your grandfather, if Jerry heard that, he’d throw you out of the house. That’s not music you’re playing. You’re imitating. You’re being a clone again.” I couldn’t get him out of it. He said, “What do I do?”
I said, “Keep on.”

That’s all you can do. Keep on. It’s like the writer Doris Lessing, a famous writer, a South African lady. She was asked, “Do you get people sending you novels they’ve written and asking for you to comment?”
She said, “Yes, it happens all the time.”
“What do you do?”
She said, “I send it back, and I say ‘do it again’.”

Most people don’t want to hear that. They want you to say, “Hey, that’s great stuff.” I’m asked a lot about new individual players. There was a kid. I don’t know what’s happened to him, Brad Mehldau. He’s a very good piano player, but the critics jumped on him. I don’t know whether he’ll be able to weather that and come out the other end. Music is supposed to be ‘pleasing’. No work of art is supposed to be pleasing. It’s supposed to be an expression of the artist to enlarge the medium in which he works. If Picasso came along with the classic period, and stayed with that, chances are that we’d never have heard of him. But he kept doing other things, over and over and over. The word is protean. He kept changing shapes. And in doing that he enlarged the medium, and the idea of what could be done with pigment on canvas. Which is what painting is about. I used a plastic reed on Stardust because it was too difficult to find a good reed. They didn’t have them numbered. Arnold Brilhart made these reeds and he got me one. It worked pretty well. So I used it. That Stardust, the so-called classic record of it, was one take.

I was called by Harry Myerson at RCA. He was the Artists and Repertoire Man.He called me and said, “Artie, RCA wants to do a stunt. Would you like to be part of it?”

They wanted the two biggest selling artists they had on one record, no A side, no B side. I said, “Sure. Tommy and I have no enviousness. We get along fine. I’m sure he’ll do it.” So when the time came I brought the band in. We had played Stardust a number of times. We made the record. One take.
I turned to the band and said, “It’s not going to get any better than that, let’s go.” So we left.

A couple of weeks later Tommy had come into town. He was playing the Palladium. After he left, I called Harry Myerson at RCA and said, “Have you had Tommy in to make his record?”
He said, “Yes, he came in, but he didn’t want to make the record because he wanted to hear what you did first. So I played him your record.”